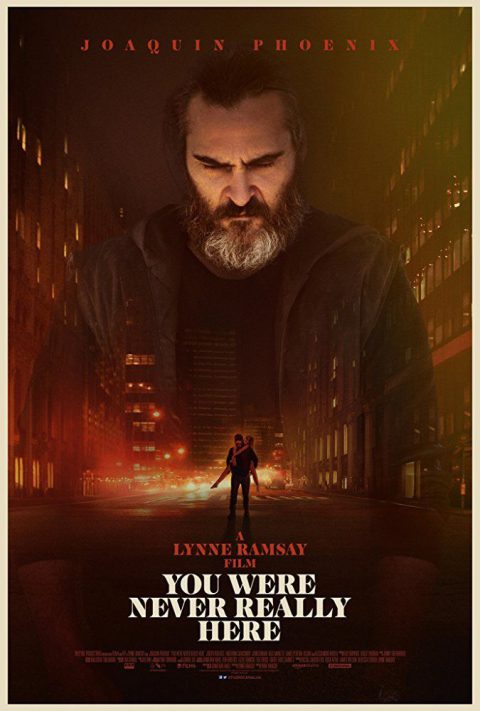 Lynne Ramsay is back six years after We Need To Talk About Kevin (2011) came to Cannes with You Were Never Really Here. A rollercoaster of an emotional ride both deeply shocking, exhilarating with a central powerhouse performance by Joaquin Phoenix. Immediately after the film was shown at Cannes it was compared to Martin Scorsese’s 1976 seminal classic Taxi Driver. That takes away from this film, yes there are echoes but this is a film very much rooted in the 21st century with it’s focus on corrupt politicians and war veterans suffering PTSD. The film won awards at Cannes and will keep winning awards because it takes you on a journey that is dark, depraved but with a chink of hope.

Joe (Joaquin Phoenix) is an ex-FBI and war veteran suffering from PTSD with demons stemming from his childhood. He’s employed in a very singular line of work as a brutal enforcer paid via an agency by parents whose children have been taken into pedophile rings and returns them.

The film pulsates with raw emotion in every single scene, we see this as the film opens when Joe has a plastic bag over his head and he is trying to shut the demons out. It is the emotional rollercoaster – not only do you see but you feel every scene, flinch at every blow that Joe delivers with a hammer as he rescues the little girl, we feel his desperation that his life has turned out the way it has.

This film is short and sweet, which feels like an oxymoron given the subject matter. However, it’s the small but significant details that linger, in one scene Joe holds a dying man’s hand. A man Joe had just shot after discovering he had killed Joe’s mother. Even in the most brutal of scenes, Ramsay offers a little glimmer of hope by showing that not all humanity is lost. This is the kind of film that you will want to watch and rewatch to capture all the details. You Were Never Really Here deftly mixes reality with fantasies. It’s the tight direction that reinforces the claustrophobia you feel – as Joe has the plastic bag over his head – even when he is outside there never seems to be a release from the relentlessness of the demons that he carries and the constant craving of release. The life he may once of had is gone but it is in the form of a 13 year old Nina that he may have found hope. It feels strangely uplifting and will linger far after the credits roll. What world are we living in when the entire moral fibre of the world is broken, including those who are charged with protecting us – politicians. A must-see again and again.