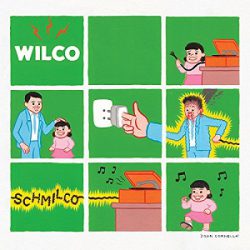 For a sprawling six-piece, Wilco sure make a quiet noise on this, their 10th album. The other side of the coin to last year’s shock-released Star Wars album, Schmilco is hushed where that was noisy, and subtle where its predecessor was brash. Both albums, however, share a certain ramshackle charm, the sound of a group trying things out and capturing the free-flowing moment, without worrying too much about pristine recordings or perfect performances.

Even more than 2007’s Sky Blue Sky, Schmilco is Wilco’s ‘acoustic’ album; indeed, opener Normal American Kids features just Jeff Tweedy’s acoustic guitar and voice, and some subdued electric snaking through the distance. If Sky Blue Sky was a little too safe and MOR, though, Schmilco is cutting, funny and as perversely infectious as anything Wilco have ever made. Time and again, the melodies in these 12 wonkily formed miniatures are stunningly strong, from the “cry, cry, cry” chorus of Cry All Day to the twisted blues calling of the swaggering Nope.

What makes Schmilco so rich, however, are the touches that subvert these pretty melodies and harmonies – the barbs of Nels Cline’s atonal twin guitars on Common Sense, the syncopated drums and buzzing synths that propel Locator from a Beatles-esque ballad to something much more sinister, the uncomfortably dry, close-mic’ed recordings and, of course, Tweedy’s thorny lyrics. “[Everyone is] in love like a stupid lump of clay,” he mutters typically on We Are The World (Safety Girl). “I know a good Armageddon might have made my day, that day.” Finest of all is Shrug And Destroy, a twilit, waltzing ballad with Mellotron and brushed drums, the equal to any of Lennon’s White Album contributions.

As ominous as it is beautiful, as harsh as it is soft, and uncomfortably, compellingly intimate, Schmilco is one of Wilco’s strongest works.