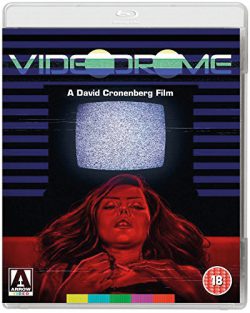 In recent years, the work of David Cronenberg has taken new directions. It is fair to say that the director has consistently been fascinated with the internal workings of the human organism; but while his early films were concerned with the physicality of his subjects his later films have busied themselves with more cerebral studies of psychology and psychopathy. He has come via Burroughs and Ballard to McGrath and DeLillo, which make his transformation from grindhouse to arthouse complete.

Earlier in his career, though, he was still obsessed with matters of the flesh. He picked his way through Shivers, Rabid, The Brood and Scanners – all films preoccupied with extreme physical transformation or disruption. Videodrome finds James Woods’ TV exec looking for edgy new shows for his cable station, when he stumbles across a pirate channel broadcasting graphic ultraviolence. As he attempts to discover its origins, he enters a typically Cronenbergian world of right-wing conspiracies, S&M and body transformation.

Viewed today, it is possible to see much about Cronenberg’s film that was prescient; or at least, that dovetails with our own anxieties about the dangerous and exploitative nature of extreme television. But it is also a critical film in Cronenberg’s canon, one that foreshadows much of his later work. The film’s exploration of the physical and psychological implications of emergent technologies throws forward to The Fly or Dead Ringers; the film also anticipates films like The Naked Lunch and Spider, which address ideas of transfigured psychological landscapes.
Woods, incidentally, is terrific – a noxious ball of narcotic rage, as in his best work – which Debbie Harry gets an early film role as a psychologist who tempts Woods deeper into his hallucinatory journey. “Long live the new flesh!”