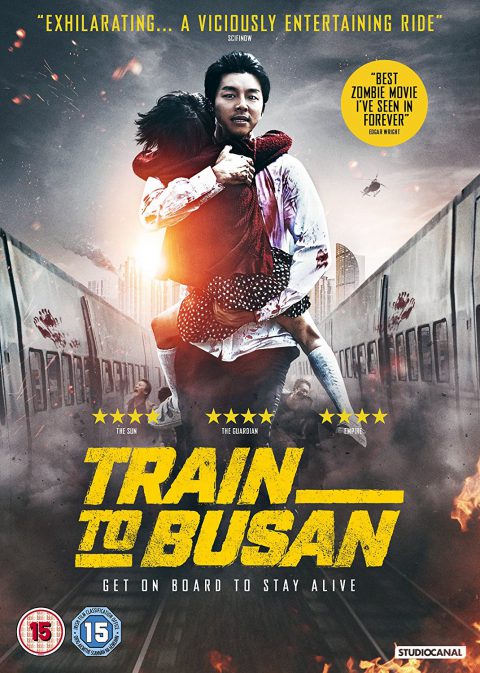 Sang-ho Yeon’s gory social satire is set almost entirely within the carriages of a train, its passengers fend off the undead acutely aware that the train will have to stop at some point.

Seok-woo (Gong Yoo) takes his daughter Su-An (Kim Su-An) from Seoul to Busan on her birthday to visit her estranged mother. During their train journey we meet a series of familiar characters; gossiping old ladies, a school baseball team, businessmen and a young couple. Despite the blood thirsty action the viewer is encouraged to empathise with the characters resulting in the film having a strong sense of humanity.

The cold efficient colours in which the travellers’ world is represented are forcefully interrupted by a generous supply of blood spatter. There is an especially grim scene involving an ill advised station stop. As with many Zombie films, Train To Busan is littered with social commentary. Poor distribution of wealth and heightened discontent with government corruption provide the social context at the time of production; a Zombie apocalypse is an allegory for the dog-eat-dog world South Koreans inhabit. There is an especially potent scene in which a group of passengers turns on one another, blocking their exit and justifying their actions on the assumption that they’re already infected. This explores the paranoia surrounding 2015’s MERS (Middle East Respiratory Syndrome) epidemic as well as populist debates about the refugee crisis.

Train To Busan breathes new life into the Zombie genre; moving beyond the temptation to exaggerate characters and rely on genre tropes, Sang-ho Yeon ensures that the viewer is taken on a journey with the characters, learning about them as people, not just passengers in great peril.