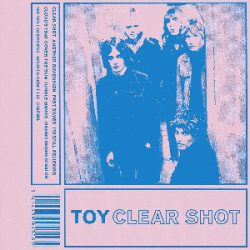 The first two albums by motorik stargazers Toy – 2012’s Toy and 2013’s Join The Dots – came in quick succession, mixing space-rock, Krautrock and indie to great success. Then, aside from an album made as Sexwitch with Bat For Lashes’ Natasha Khan last year, there was silence.

Now the five-piece have returned, proclaiming new influences ranging from the acid-folk of Comus and the transgressive art happenings of COUM, to the soundtracks of John Barry and Ennio Morricone. That Clear Shot sounds similar to Toy’s first two albums is at once a relief (what exactly would an industrial-folk Toy have sounded like?!) That pounding Klaus Dinger beat and Tom Dougal’s blank-eyed vocals still anchor the sound, as the group gets lost in a mist of distortion and echo on the likes of Dream Orchestrator and the C86-esque Another Dimension.

There are some diversions off the beaten track, however – the closing Cinema begins with a minute of clanging, aptly cinematic guitar, like something from Neil Young’s Dead Man soundtrack, before the band kick in and the song transforms into a slow, stoner ballad. Feedback rises in the last two minutes, and the album goes out in a wave of noise that would make Kevin Shields proud. Clouds That Cover The Sun, meanwhile, is an endlessly changing 6/8 waltz reminiscent of latter-day Radiohead and the more out-there moments by Toy’s mentors The Horrors; both songs show that Toy are capable of far more subtlety and variety in the future, if they choose to leave the motorik bluster behind.

While Clear Shot, then, isn’t the great leap forward that some might have hoped after reading of the group’s recent listening habits, it’s a strong, solid album, and a fitting end to their noisy first trilogy.