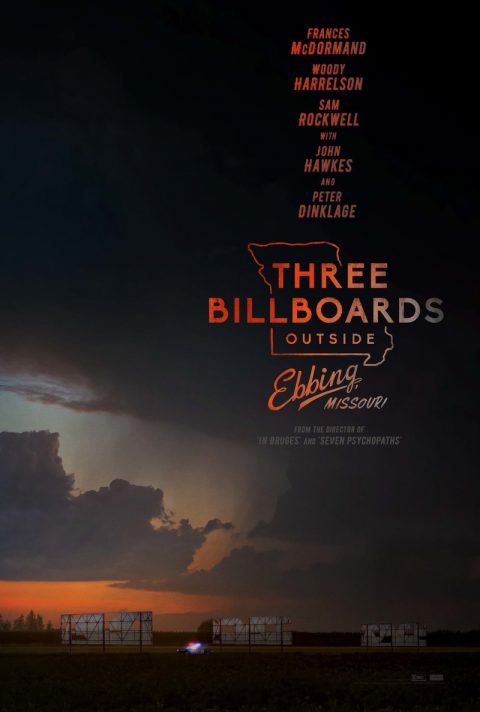 Three Billboards Outside Ebbing, Missouri is a black comedy-drama written and directed by Martin McDonagh. It is a bold and yet tender look at grief, regret and hope. The entire cast give astounding performances and whilst Frances McDormand is central to the credibility of the film and making it as engaging as it is, Woody Harrelson will steal your heart as Chief Willoughby.

Seven months after Mildred Hayes’s (Frances McDormand) daughter, Angela, is murdered and irritated that the police investigation has ground to a halt she pays for three billboards outside of Ebbing to reignite the police into action. Not only does this desire effect but it also has unintended consequences which are explored in this tightly written fim.

The film excavates how small town America thinks and behaves – with plenty of frequent colourful language thrown in for good measure. Running throughout Three Billboards…are themes touching on social injustice but all also themes of death, regret, anger and grief. At one point these billboards go up in flames which results in a heartbreaking scene of Mildred trying to put out the raging fire. Her son Robbie screams out after her: “Mom it’s too late”. However, is it ever too late to give up hope?

Three Billboards Outside Ebbing, Missouri is a thoughtful and thought provoking piece of work. The sharp dialogue and great ensemble cast makes this film a must-see.