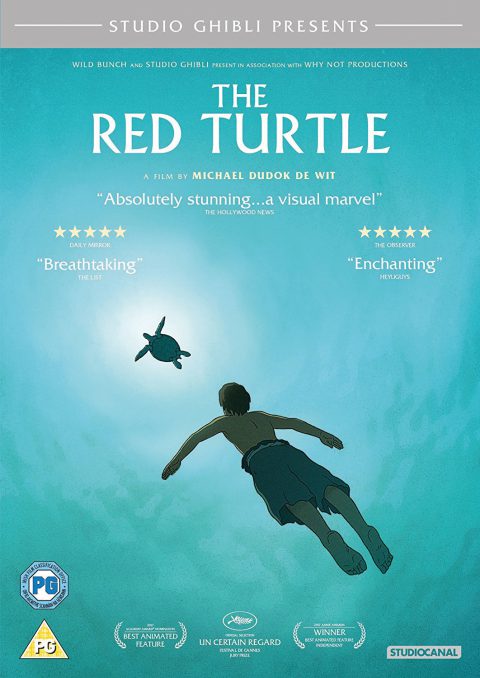 The animator Michael Dudok de Wit is something of a late starter; this, his first feature film, was made when he was 63. Nevertheless, what he lacks in youthful exuberance he more than compensates for in artistry. Essentially, The Red Turtle is an unexpected collaboration between the London-based Dutchman de Wit and the storied Japanese animation house, Studio Ghibli, creators of Spirited Away, Grave Of The Fireflies and countless other masterful exquisite works.
De Wit’s story is a wordless fable in which a man becomes castaway on a desert island, where he encounters a mysterious giant turtle; just one of the marvelous, enigmatic curios de Wit’s Crusoe encounters during his enforced sojourn on this tropical paradise.

De Wit’s story – rendered so beautifully by the Studio Ghibli crew – isn’t entirely sweet-natured. The capricious qualities of the natural world ensure the food chain is well stocked; not all those cute baby turtles the castaway watch flap down the sand at night survive. Small crabs provide dinner for greedy seagulls. Elsewhere, the man encounters a woman on the island, they have a child; the cycle of life moves on.

The red turtle itself? Early on, the man builds a raft from bamboo to escape, but the craft is sunk; he tries a second time with a similar result, then a third, before discovering that his route to freedom is being blocked by an enormous red turtle who has clearly decided that the man should remain on the island. Why? And for what purpose? De Wit never tells us; which simply enhances this elegant and moving piece of filmmaking.