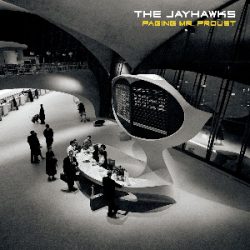 Though they haven’t ventured as close to the left-field as their compadres Wilco, Minneapolis’ Jayhawks have been on a similar journey from country-rock to more exotic climes. After perfecting their exquisite alt-country on 1992’s Hollywood Town Hall, the group dabbled with psychedelia on 1997’s Sound Of Lies, pop on 2000’s Smile and earthy folk on Rainy Day Music three years later.

Co-singer and songwriter Mark Olson returned for 2011’s strong Mockingbird Time, but he’s now departed again, leaving Gary Louris as the leading agent on this excellent, diverse follow-up, produced by former lead guitarist and founding member of R.E.M. Peter Buck. The quartet are still eager to experiment: Pretty Roses In Your Hair begins with a distorted drum loop and the sound of church bells, though Louris soon launches into a blistering solo with a distinct Neil Young feel; elsewhere, Ace pairs a low-slung Creedence-style groove with fuzzy electronics and abstract Space Echo’d guitar. The potential for misstep is high with these juxtapositions, but Louris and The Jayhawks pull it off by avoiding the glossier production that marred albums such as Smile.

Other cuts on Paging Mr. Proust stay closer to home, yet Louris’ melodies are always sparkling and the group’s arrangements talon-sharp. The bittersweet, mid-tempo Lies In Black And White seems to imagine the fruits of a songwriting session between Robert Pollard and Neil Finn, the dusty plod of The Devil Is In Her Eyes could have easily snuck onto the band’s early ’90s work, and opener Quiet Corners & Empty Spaces is a Beatles-esque power-pop delight, all jangling acoustics and Leslie’d lead guitar.

With their lineup depleted once again, The Jayhawks have still turned out yet another solid record, at once familiar and exploratory. As Louris sings on Comeback Kids, “We’re the comeback kids/Never forget what we did or where we came from.” Long may they fly.