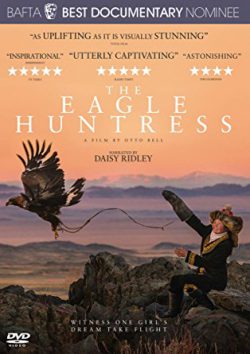 A feelgood film about Kazakh falconry, you say? Set in the snowy, rock terrain of the Altai mountains? Director Otto Bell’s film is part social documentary, part nature study and part rites of passage drama; combined, all three present a remarkable snapshot of life in a remote region where one plucky 13 year old girl wishes to pursue her unusual dreams.

This is Aisholpan, from a tribe of nomad Kazakh, who wishes to follow in her father’s footsteps. He is an eagle hunter, who has a remarkable relationship with the birds of prey. Captured in infancy, they are trained to aid in hunting, but only for seven years, after which they are released back into the wild. But Aisholpan’s ambitions are frowned upon by the community elders, who believe a girl should follow a more domesticated path. Aisholpan enters the tribe’s annual Golden Eagle competition – the first female to do so and the contest’s youngest ever contestant. What follows is predictable, but no less spellbinding.