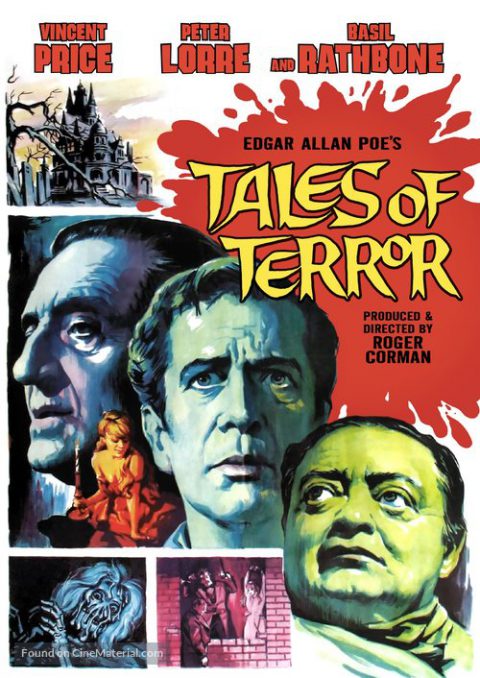 Edgar Allan Poe had an exceptionally good 1960s. Thanks largely due to the patronage of b-movie filmmaker Roger Corman, eight Poe adaptations were committed to celluloid – starring, inevitably, the grand master of gothic cinema, Vincent Price. Corman’s peak decades were the Sixties and Seventies, when he produced early films by Martin Scorsese, Francis Ford Coppola and Peter Bogdanovich and gave Jack Nicholson his break. Corman’s strategy was to spend so little on overheads for his pictures that within weeks of release, one of his films was already in profit. But their style and opulence belie the modest budgets and shooting schedules. It is impossible to watch, say, The Masque Of The Red Death – shot by a young Nicolas Roeg – and not be enamoured with its ravishing visuals.

From 1962, Tales Of Terror is the fourth in the Corman-Poe cycle of films. An anthology film, it is adapted from three of Poe’s short stories by Richard Matheson – author of I Am Legend, the dystopian vampire novel, and numerous episodes of The Twilight Zone. It stars Price, Peter Lorre and Basil Rathbone – very much the ne plus ultra of this kind of movie. Lorre, of course, made his astonishing debut as the child-killer in Fritz Lang’s M and went on to become a master character actor. Rathbone – by far the greatest Sherlock Holmes, and a wonderful screen villain in swashbucklers like The Adventures Of Robin Hood to Captain Blood. Price, of course, is at his baroque, barnstorming best, starring in all three stories – which involve vengeance from beyond the grave, entombment and a sinister hypnotist. These are elegant and funny stories, despite their innate macabre plots, and while the anthology format might deprive them of the sweep of the other long-form entries in this cycle, nevertheless they remain perfectly formed barbs.