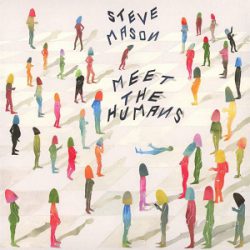 Over a decade after The Beta Band quietly broke up, Steve Mason has returned to the melodic, eccentric pop that many fans probably wished he would have pursued after their dissolution. There’s a more classicist producer at the helm, too, in the shape of Elbow keyboardist Craig Potter, also contributing piano and organ.

Not that Meet The Humans is a duller listen than Mason’s other work, however, more that the experimentation and anger has been channeled into infectious songs, enhancing emotions rather than sabotaging them. Take Alive, which mixes beats, melodica and splashes of droning, buzzing tambura into Mason’s most accessible creation since The Beta Band’s Dry The Rain; or Through My Window (in fact, a demo that Potter and Mason decided to keep intact), a delicate mantra of seesawing guitar and piano, over which Mason sadly intones: “Is there anybody free… is there anybody out there?”

It turns out that Mason does windswept, ornate indie well too, with orchestrations sweetening the sonic field on To A Door and Ran Away, the latter dripping with strummed acoustic guitar, piano, organ and rather grand strings. The closing Words In My Head is a more bracing surprise, however; over a swift, ’90s breakbeat and piano stabs, Mason sings to his listeners – “Can I give you something sweet, in the way that makes you click your feet?/So you’ll come back to me… Can you feel the words in my head?” It’s a bittersweet ending to Mason’s most joyous, exultant offering in years.