The Killing Of A Sacred Deer 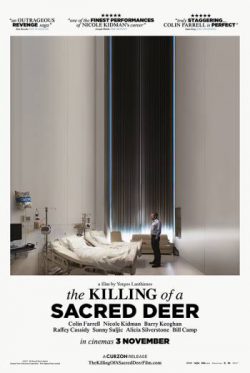 The Killing Of A Sacred Deer will remain in your psyche long after the credits have stopped rolling. It is a genre defying film with a sharp, black-comedy script at its heart.

Steven (Colin Farrell) is a successful heart surgeon, he’s married to an ophthalmologist (Nicole Kidman) and they share two children; their teenage daughter Kim and younger son Bob. At the beginning of the film we meet Martin. Steven and Martin, it transpires, have been having clandestine meetings in diners – Steven even buys Martin a very expensive watch. We later find out that Martin’s father died on Steven’s operating table. Steven then suggests that Martin should meet his wife and children; it is after this meeting that Steven’s world falls apart and Martin’s psychotic nature is revealed.

If you like your films to fall into a defined genre then you might struggle here, but that is the beauty of The Killing Of A Sacred Deer and what Yorgos Lanthimos is known for – his films defy genre. You could perhaps loosely describe the film as a psychological thriller, although you couldn’t stop there; it’s a layered piece of work full of metaphors and allegories. Forget all reason and logic and just let Lanthimos and the incredible cast be your guide.

The opening scene of the film starts in total darkness, the black fades to an image of open heart surgery being performed. This sets the viewer up for the tense, funny, surreal and often difficult to watch feature that will follow. It’s a film that defies all logic but that ultimately works well, a must-see.