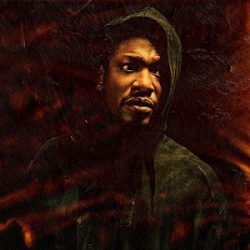 album of the month

Not only one of Britain’s greatest musical artists, but one of the greatest lyricists full stop, Roots Manuva AKA Rodney Smith is back with a dazzling new album, Bleeds.

Past collaborations with everyone from Gorillaz to The Maccabees, from Leftfield to Coldcut and The Cinematic Orchestra, Rodney Smith’s influence can be heard right across the musical landscape. Now, with his sixth studio album, he has made his most concise and focused record to date, his most emotionally affecting and powerful release since his breakthrough, Run Come Save Me.

The title of the record is, in the man’s own words, an “egocentric jest of daring to do things in the tradition of Jesus: I’m ready to bleed for the artform.” It is, of course, also a reference to the way in which genres, in the sonic world of Roots Manuva, have a tendency to bleed into one another and create “liquid soul, the blood, the bleeds that paint infinite sacred wonders in our dreams and unfold in our day-to-day.”

From the opening chords of Hard Bastards you know Bleeds is going to be something special. The tune combines melodramatic strings and choral work with hard-hitting social comment and leaves us in no doubt that there will never be any sell-out in Manuva world, just a relish in being “a voice for those who have little or no voice.” The album culminates with the stunning, raw and beautiful I Know Your Face, which could leave you devastated if not followed up by the revived vigour of Fighting For.

One of the true pioneers and originals of British music, any album from Roots Manuva is an event. When it’s as good as Bleeds it’s one of the musical events of the year. Both genre-defying and deeply rooted in what he describes as “the culture of Bass and Verb,” the record innovates and consolidates in equal measure. Rodney Smith describes himself as “a British Black musical Mark Rothko” and Bleeds is another masterpiece from this abstract wordsmith.