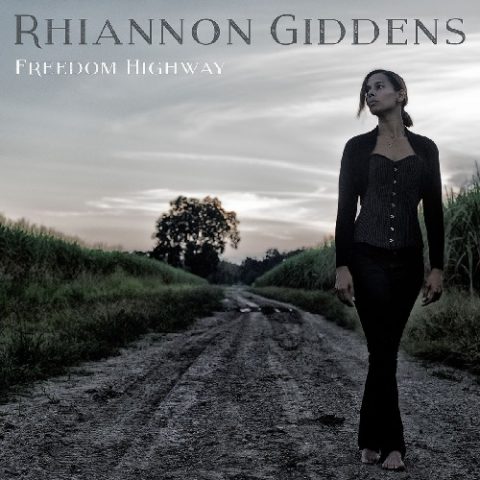 “There is just one thing I can’t understand, my friend/Why some folk think freedom was not designed for all men,” sings Rhiannon Giddens on the closing title track of her second solo album. It’s a cover of The Staple Singers’ Freedom Highway, but elsewhere on the latest by the former leader of the Carolina Chocolate Drops, Giddens crafts her own material examining the continual quest for Civil Rights in America in the time of Black Lives Matter and President Trump.

Opening track At The Purchaser’s Option was, according to Giddens’ interview in a recent UNCUT, inspired by a shocking 18th century American advertisement for a female slave, with her daughter at the option of the buyer. The tale is told with Giddens’ customary textures of fiddle, banjo and double bass, but with a strong backbeat behind. Indeed, throughout Freedom Highway she delves into the folk tradition but fortifies it for the modern age: Better Get It Right The First Time mixes room-toned drums with coy electric guitars, horn stabs, a rap cameo from Giddens’ nephew, and her own soulful, restrained vocals, while Hey Bebe mixes banjo and skittering, brushed drums with Alphonso Horne’s raucous, jazzy trumpet.

Giddens wrote only one of the songs on her debut album, 2015’s Tomorrow Is My Turn, but here the Greensboro native really shows the range and power of her songwriting. Julie returns to the times of the plantations and the American Civil War, while Baby Boy charts a man’s life, as lovingly told by his mother.

Primarily recorded live, Freedom Highway is as sparse and true as Giddens’ voice is honeyed and rich, with its sad songs of violence and oppression striking an unfortunate chord in the America of 2017. As the final, title song of this important record shows, though, there’s always hope for a new dawn, however dark the sky might seem.