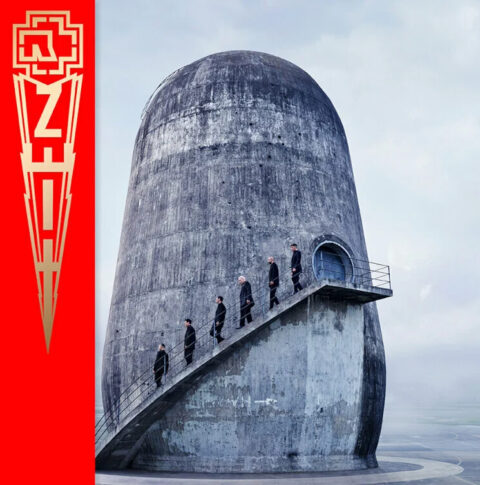 In 2020, Rammstein were due to perform several shows across Europe, the UK and the Americas in support of their self-titled (or rather, untitled) 7th album. However, along came Covid-19, which ravaged across the world, postponing and cancelling any and every gig in sight. So naturally, as most acts did during the lockdowns, the band wrote some brand new music. Except in Rammstein’s case, it wasn’t actually meant to happen.

Their 8th album Zeit was actually unplanned, and was only made due to the fact that they couldn’t play shows! In a sense, this is a perfect example of a ‘happy little accident’, and it is one that fans of the group can’t exactly fault. The artwork was shot by none other than Bryan Adams, of all people (yes, THE Bryan Adams) and shows the group walking down a staircase at the Trudelturm in Berlin, almost as if they’re coming out of isolation to show their faces to the world again.

The record contains some of their heaviest riffs in a good while, noticeable on tracks like Angst and Dicke Titten. And it’s also good to see that their crude humour hasn’t gone anywhere, with some track titles being so jokingly obvious that you don’t need to get Google Translate up to understand what it means. Meine Tränen very much feels like a homage to their 2001 track Mutter, something I’m sure fans will appreciate the nod to, and vocalist Till Lindemann’s vocals are as beautifully harsh and pronounced as ever.

With the band having just announced brand new tour dates for 2023, including what will be their biggest UK show yet at Wembley Stadium, it’s safe to say that this album will sound just as huge when performed live as it does on record.