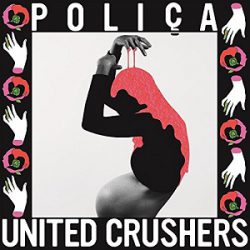 On their first two albums, 2012’s Give You The Ghost and the following year’s Shulamith, Minneapolis’ Poliça brought some live muscle to a synth-based, electronic sound, thanks to their dual drummer line-up of Drew Christopherson and Ben Ivascu, and the charismatic presence of vocalist Channy Leaneagh. Yet the collective’s third album, United Crushers – recorded in El Paso, Texas, with group svengali Ryan Olson of Gayngs again producing – sounds even more vibrant and airy than Shulamith; for a start, Leaneagh’s shape-shifting vocals are mostly shorn of the pitch-shifting and Auto-Tune effects of Poliça’s earlier work.

This doesn’t mean that her cryptic lyrics are any easier to decipher, however: “Get the eff off,” she seems to drawl at one point, while closer “Lose You” appears to include the line “I can’t f*** you enough”. To balance these mumbled, enthralling words, the group have worked up some of their most upbeat music yet, notably the infectious Baby Sucks, equipped with an anthemic chorus and brassy horns. There are chillier elements here, and echoes of The xx or Fever Ray, but the slick ’80s style of Gayngs is particularly strong in the chorused bass guitar of Lose You or the yearning coldwave shuffle of Lately.

Perhaps the finest development is Kind, where Leaneagh, backed by a pounding kick drum and mangled, reverbed synth stutters, moans over reversed, pitch-shifted samples of her former self. “Whether I was I was your woman, whether you were you were my man,” she sings. This is emotional, intelligent and stylish pop music; and if Tame Impala can be covered by Rihanna on her recent Anti album, then Poliça deserve their own similar entry into the mainstream.