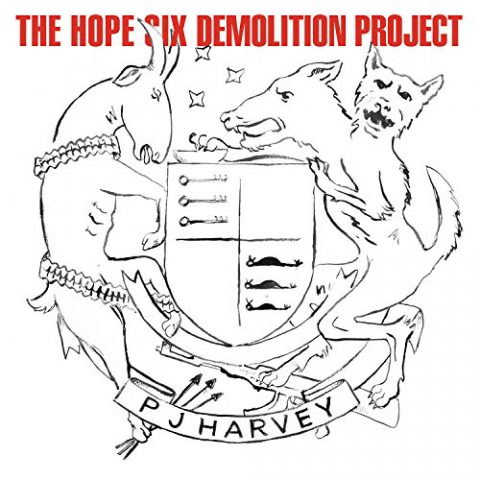 “I took a plane to a foreign land,” sings PJ Harvey on The Orange Monkey, the seventh song on her ninth album, “and said I’ll write down what I found.” Rather than jetting off to some exotic paradise, however, Harvey visited Kosovo, Afghanistan and Washington DC, and now has documented her impressions, in poems and songs: a “shithole” of a school, an old woman guarding empty homes, a bombed-out government ministry, a child teasing starlings.

Like 2011’s Let England Shake, this is primarily a portrait of the devastation of war, except with the focus shifted from The Great War to the present. Yet, if Shake was an elegiac tribute, as beautiful as it was moving, The Hope Six Demolition Project is as ugly and unwieldy as its title. The 11 songs here are pounding, discordant edifices, laced with cacophonous saxophone, martial drums and male choruses that almost smother the songwriter herself.

Opener The Community Of Hope and first single The Wheel are reminiscent of Harvey’s Stories From The City… material, yet the lyrics are stark and journalistic: “Here’s the old mental institution/Now the Homeland Security base,” Harvey sings on the former. Things soon take a darker turn: The Ministry Of Defence features bleating saxophones and narration from Linton Kwesi Johnson; A Line In The Sand perversely ends with the melody from Jonathan Richman’s Egyptian Reggae even while it asks “how to stop the murdering”. The eerie River Anacostia is calmer, yet it offers little salvation, as Harvey imagines a Christ-like figure walking on water full of poisons “from the naval yard”.

This being a collection of songs and not a UN report, Harvey provides no solutions to the situations her lyrics describe: instead, these are monochrome snapshots of the world at its worst. Shocking, sad and savage in equal measure, it’s nevertheless impossible to deny their power.