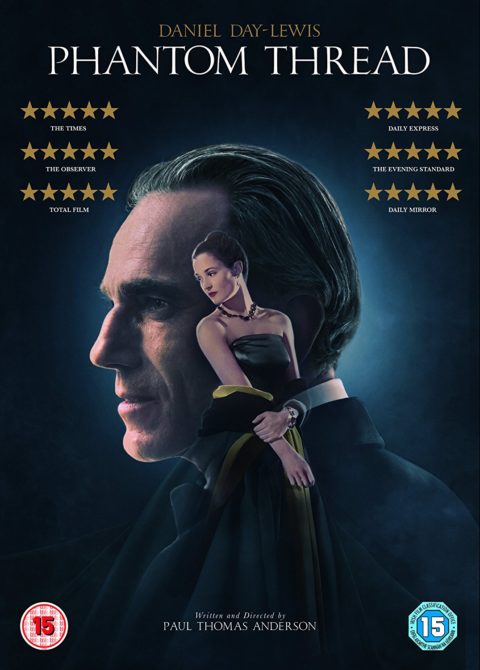 Is it truly his last film..? Here, Daniel Day-Lewis plays Jeremiah Woodcock – a celebrated couturier to the post-war aristocracy, Woodcock is witty and nimble, elegant and epigrammatic. As with many creatives operating at the highest level, he is also fastidious and obsessive: one dress is described enigmatically as “worth everything we’ve been through.” In conjunction with his gimlet-eyed sister Cyril (Leslie Manville), Woodcock runs his operations from a splendid Georgian townhouse in London; but alas, as Paul Thomas Anderson’s film opens, this empire is faltering. First Woodcock finds himself under threat from the New Look, and then he is unexpectedly beguiled by Alma (Vicky Krieps), a German waitress who becomes his muse.

Although there are a lot of clothes in Phantom Thread, it is not particularly a film about fashion. It is about control and obsession and the disruption of a status quo by a new arrival – in which case, it is possible to see this as thematically similar to Anderson’s 2012 film The Master.

But unlike The Master, Phantom Thread is often very funny. There are droll flashes of drawing room farce – as well as a darker comic grain. In one scene, Woodcock complains testily that Alma butters her toast with “too much movement”. There is a late-arriving macabre gothic twist to the story that underscores Alma’s growing control over Woodcock.

Incidentally, everyone is splendid in Phantom Thread – Krieps and Manville particularly – and the film is technically perfect and beautifully shot. But this is a Day-Lewis joint – he is dazzling and exuberant, and not a little hammy. “Chic?” He exclaims with disgust as he is brought news of Dior’s pioneering work across the Channel. “Fucking chic.”