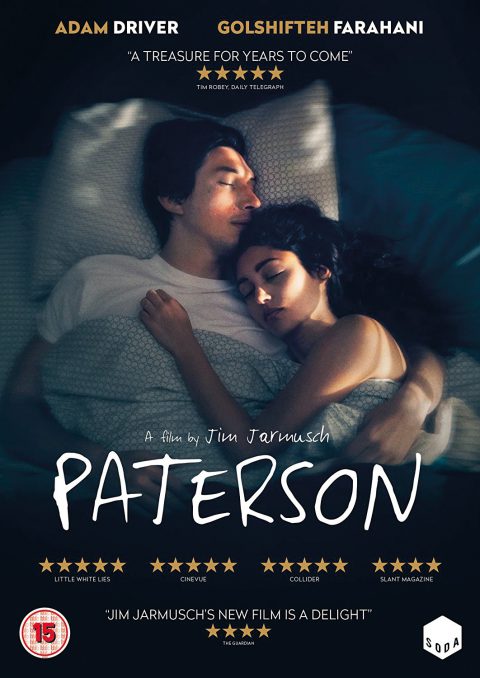 2016 was an auspicious year for Jim Jarmusch. He released two films – Gimme Danger, a documentary about Iggy and the Stooges – and Paterson, a quiet, contemplative character study. Superficially, these two films couldn’t appear further apart: wild tales from the rock’n’roll frontline versus Zen-like philosophising. But both films were, in their own ways, celebrations of small-town lives and dreams, Iggy in Ann-Arbour, Michigan and Paterson in Paterson, New Jersey.

Paterson (the man) is played by Adam Driver – a bus driver and aspiring writer who, bound by the coincidence of his name, enjoys an almost karmic sense of cosmic connection to his hometown. As we discover, Paterson (the place) has yielded many famous residents, from Hurricane Carter to 18th century anarchist weaver, Gaetano Breaxi and soul man Sam Moore. Paterson’s sense of civic pride is palpable; each day he goes to work, drives his bus, listens to snatches of passengers’ conversations and writes poetry during his lunch-break.

The film is structured as a week in Paterson’s life. Each day is essentially repetitive – the plot, such as it is, is taken up by distractions to his routine, minor misfortunes or happy accidents which Paterson calmly truffles through for meaning. In that sense, Paterson recalls Forest Whitaker in Ghost Dog: Way Of The Samurai – another Zen-like spirit searching for deeper enlightenment in every day circumstances.

Driver is superb, incidentally, as his Golshifteh Faranhani as his wife, Laura. While he is prone to philosophising, she is loose and unaffected, embarking each day on a new artistic endeavour – from painting to baking or learning to play the guitar. Naturally, she excels at all of these. It is evidently a happy marriage, but there is an undercurrent – they do not have children – which is directly addressed only once. Laura tells Paterson she dreamed they had twins and, in one of his cosmic quirks, he sees twins all over town. A lovely film; one of Jarmusch’s very best.