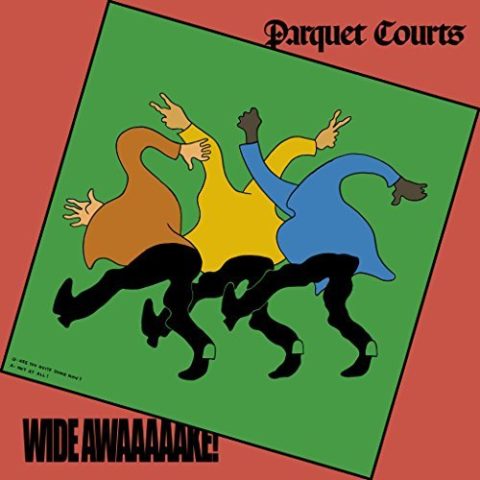 Parquet Courts have made some stellar music over the last few years, but it’s been hard to shake the feeling that they’ve failed to develop on the sound of their excellent 2012 LP, Light Up Gold.

Unlike 2014’s Sunbathing Animal or 2016’s Human Performance, however, Wide Awake! finds the band dramatically altering their modus operandi. To shake things up, they’ve enlisted Danger Mouse to produce them, as perverse an act as Mark Ronson producing Queens Of The Stone Age on last year’s Villains, and sucked in funkier, syncopated rhythms into their propulsive, Strokes-y garage.

Wide Awake! itself features cowbell, whistles, funk bass and chanted vocals, and sounds shockingly like !!! – but it works, with the band’s guitars still scratchy and high in the mix and their vocals raw around the edges. Violence is carried by a ’60s funk groove centred around electric piano, synth and vintage organ, the perfect backing for Andrew Savage to chant a monologue on America today: “Sad is how I feel when the radio wakes me up with the words ‘suspected gunman’,” he spits, before the band chorus “Violence is daily life.”

It’s not all a departure, however. Normalization could have fitted on any Parquet Courts album to date, while Extinction continues Austin Brown’s catalogue of excellent staccato riffs.

The moments that stick in the mind after Wide Awake! finishes revolving, though, are the braver ones: the penultimate Death Will Bring Change, a slow ballad featuring a children’s choir and Mellotron, or Tenderness, a Curtis Mayfield-esque disco track with chicken-scratch guitar and playful piano. The success of Wide Awake!, however, is in the fact that whatever Parquet Courts try, they come out with their previous identity intact. A surprising and exciting progression, then, and better late than never.