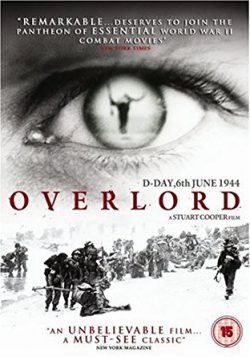 ‘Overlord’ was the codename for the Allied invasion of Europe that began in June 1944; an ambitious and ultimately successful mission that provided a springboard for the liberation of Western Europe. The D-Day landings themselves – 6th June – were dramatic enough on their own, although Hollywood has since attempted to recreate the epic intensity of those events in The Longest Day, Sam Fuller’s The Big Red One and Spielberg’s Saving Private Ryan (and his HBO series, Band Of Brothers). Compared to those, Stuart Cooper’s 1975 film Overlord is an unusually reflective film. Certainly, its power is derived not from big budget combat sequences or tales of selfless derring-do, yet it conveys a convincing, authentic sense of the wartime experience. The original theatrical trailer described Overlord as “the most haunting and hypnotic film to have been made about the war, and what it was like to fight it” – which, it transpires, is no idle boast.

Cooper and his cinematographer John Alcott – who was also working with Stanley Kubrick at the time – blended experimental narrative filmmaking with archival footage (both British and German) supplied by the Imperial War Museum, which gives immediacy to this account of a 21 year-old soldier from enlistment to basic training and on to the front line at Normandy. The steps Tom (Brian Stirner) takes are brilliant managed by Cooper, who telescopes out from the experiences of one individual to reveal the full spectacle of the military resources involved. “The war machine keeps getting bigger and bigger, while we get smaller and smaller. Until we disappear.”

The fatalities among the Allied forces during the Normandy campaign exceeded 250,000 – British, French, Polish, Belgian, Czechoslovak, Greek soldiers among them. Europeans working together, in other words, against a common enemy. For that alone, this release is well-timed.

– Restored high-definition digital transfer, supervised by director Stuart Cooper, with uncompressed monaural soundtrack on the Blu-ray
– Audio commentary featuring Cooper and actor Brian Stirner
– Mining the Archive, a 2007 piece featuring archivists from London’s Imperial War Museum detailing the footage used in the film
– Capa Influences Cooper, a 2007 photo essay featuring Cooper on photographer Robert Capa
– Cameramen at War, the British Ministry of Information’s 1943 film tribute to newsreel and service film unit cameramen
– A Test of Violence, Cooper’s 1969 short film about the Spanish artist Juan Genovés
– Germany Calling, a 1941 Ministry of Information propaganda film, clips of which appear in Overlord
– Excerpts from the journals of two D-day soldiers, read by Stirner
– Trailer
– A booklet featuring an essay by critic Kent Jones, a short history of the Imperial War Museum, and excerpts from the Overlord novelization by Cooper and coscreenwriter Christopher Hudson