Songs From The Haunted South 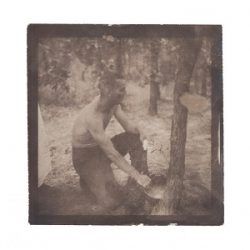 Though The Earlies may not quite be a household name, the two kaleidoscopic albums that the Anglo-American quartet released last decade – 2005’s These Were The Earlies and 2007’s The Enemy Chorus – still exert a rare pull on those who have heard them.

One quarter of the band, Texas-born John Mark Lapham, has now crafted a spooked, hazy album under the name Old Fire; part Americana and part ambient, and originally begun with singer-songwriter Micah P Hinson, it’s been a decade in the making.

Lapham’s ’90s electronic work has certainly informed his work here, but Songs From The Haunted South appears to be primarily inspired by the dark ’80s dream-pop of This Mortal Coil, as well as the lighter drifts of Brian Eno’s most gaseous pieces. As on This Mortal Coil’s albums, most of the songs are covers, helped along by a varied cast of guest musicians and vocalists, including multi-instrumentalist DM Stith, Swans guitarist Thor Harris, and Tom Rapp of ’60s psychedelic folk veterans Pearls Before Swine.

Song choices are similarly diverse: Shearwater’s “Helix” is here based around a weighty Rhodes piano, while Jason Molina’s “It’s Easier Now” comes enriched with martial snares and tremolo guitar. Other selections are more out-there, with Psychic TV’s “The Orchids” given a tumbling treatment like Nico’s “These Days”, before being enveloped by uncoiling Ebow tones.

Lapham’s ethereal instrumental tracks are also crucial elements to Songs From The Haunted South, with the opening “Old Fire 3” building to a hazy, reverbed crescendo, and the synthetic choir on closer “Deadhouse Dream” reminiscent of Popul Vuh’s soundtrack to Werner Herzog’s Fitzcarraldo.