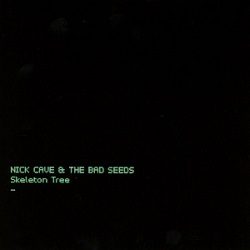 Much of the Bad Seeds’ 16th album was written before Arthur Cave’s fatal fall at Ovingdean Gap in July 2015; and yet Skeleton Tree is deeply infused with the horror of that event, and the effect it has had on his family. Nick Cave has often dealt with dark themes in his work over the years – murder, heartbreak, fire-and-brimstone justice – but none of it proves as blankly chilling as Skeleton Tree, Cave’s deepest masterpiece.

“I used to think that when you died you kind of wandered the world in a slumber ’til you crumbled [and] were absorbed into the earth,” he sings on Girl In Amber. “Well, I don’t think that anymore.” Here, as on the seven others, Cave sounds broken, his voice infused with none of the drama he often invokes – as a result, listening in is overwhelming and uncomfortable.
Underneath his voice are layers, some sparse, some dense, of warm piano and strings, and cold electronics. Some of Skeleton Tree’s songs are almost ambient, in fact: Magneto is anchored by bass groans, echoed guitar and strange synth tones. “The urge to kill somebody was basically overwhelming,” mutters Cave. At times, all five of the Bad Seeds are barely there, a testament to their sensitivity and feel for restraint. It’s a stunning, bruising combination.

With the last two songs, some kind of dawn breaks – it’s not redemption exactly, more survival or endurance. On the closing title track, Cave actually sings, showing a tenderness that the numb, despairing earlier songs lack. It all ends with Cave standing at the sea and calling out, even though “the echo comes back empty”. Make no mistake; this is a difficult album, both in its subject matter, its sound and the effect it has on the listener. As a reaction to a tragedy and as a bona fide work of art, however, Skeleton Tree is peerless.