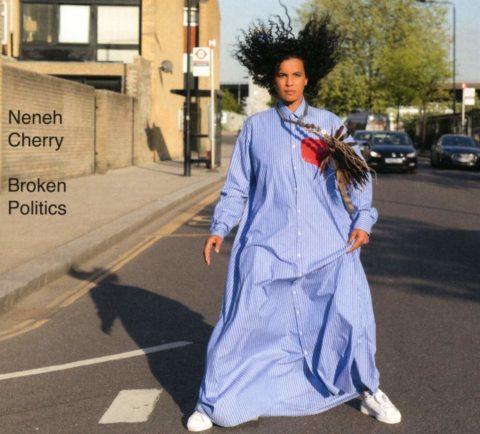 “Lies travel faster than the truth,” sings Neneh Cherry on her new album, Broken Politics. It’s hard to disagree, just as it’s hard to find fault with Cherry’s takes on the refugee crisis and gun culture. Yet her fifth solo album manages to be life-affirming and joyous despite the dark subject matter. Recorded in Woodstock, upstate New York, with Four Tet in the producer’s chair, it’s got Kieran Hebden’s fingerprints all over it – the looped steel band and jazz samples that power Natural Skin Deep, say, or the hypnotic droning harp on Deep Vein Thrombosis.

Within his faultless soundscapes, though, Cherry and her co-writer, partner Cameron McVey, conjure up a set of equally memorable songs about the troubles of our time. “Goddamn guns and guts and bitter love still put a hole in me,” Cherry sings on the dubby Kong, while Slow Release, at six minutes the longest track here, seems to deal with the trials of love: “Can’t seem to be released,” she repeats. Synchronised Devotion is a highlight, with Cherry floating above a mix of piano, ambient reversed loops and vibraphone. The audacious Natural Skin Deep, meanwhile, mixes its steel band samples with air horns, sirens and spacey synth sounds. “I have an allergy to my realness,” sings Cherry. “My love goes on and on, try it baby…”

If Broken Politics can be called a protest record – and, for the most part, it could be – then its real success is in the way it melds serious lyrics about, say, the rise of the far right in Sweden, with some of the deepest, jazziest and most laidback music Cherry has produced. The issues discussed are often gloomy, but there’s no misery here, just anger and beauty in equal measure.