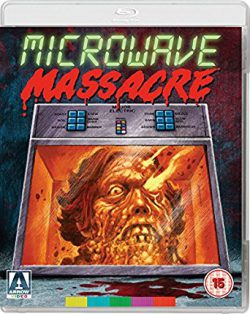 Wayne Berwick might not be among the first names that spring to mind when discussing Midnight Movies. Nevertheless for genre devotees, his name is synonymous with a handful of knowing, low-budget shockers – chief among them is this, which capitalized on the growing craze for home cooked convenience food in the 1980s. Jackie Vernon – a stand-up comic by trade who also provided the voice for TV’s Frosty the Snowman – plays Donald, a blue-collar schmuck, stuck in domestic drudge. His relationship with his wife is fractious, to say the least, and one night he accidentally kills her. Storing her corpse, he casually turns to cannibalism – and before long is serving up delicious, home-cooked lunches to his work colleagues. As you’d imagine, it is played strictly with tongue in cheek.

Berwick’s film has some of the trashy, no-taste vibe of early John Waters, and by casting Vernon he shares Waters’ love of presenting familiar faces in unfamiliar roles. Berwick’s film perhaps best encapsulates the idea of transgression familiar from all of the best midnight movies – the sense where a protagonist reaches a point from which there is no return. In Waters’ Pink Flamingoes, that’s Divine eating dog feces; in Microwave Massacre, it’s not so much the moment Donald idly wonders what his late wife’s fingers would taste like – it’s the moment he decides to go back for seconds.

Of Berwick himself, little is known outside the few films he directed and a handful of television credits. Microwave Massacre, for good or ill, is probably his finest hour.