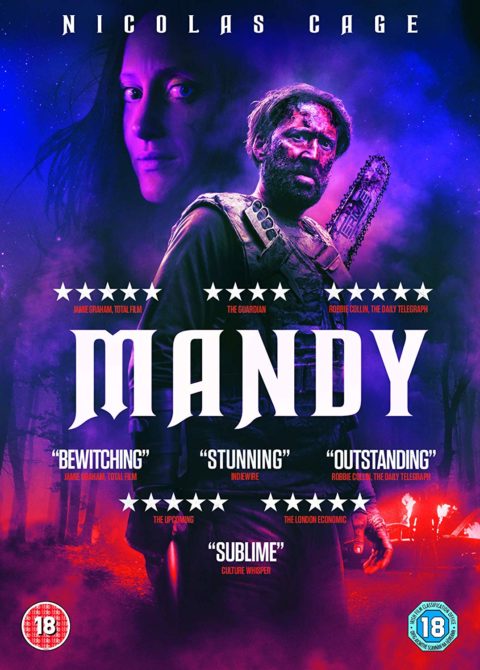 The full range of Nicolas Cage’s ferocious acting ability is on display in Mandy – a grindhouse revenge thriller that offers us LSD-crazed bikers, several deaths by burning and axe-smelting. It is nothing if not full on, and for a joint like this Cage is most definitely a filmmaker’s go-to guy.

Mandy is Andrea Riseborough, who lives with Red (Cage), her lumberjack husband, in an isolated cabin. The year is 1983, and director Panos Cosmatis digs deep into a colour-saturated palette reminiscent of VHS box cover art while the late Johan Johannsson’s synth-heavy score recalls the semi-John Carpenter drones of the era’s pulpier horrors. Surprisingly – but not unpleasantly – King Crimson feature on the soundtrack.

When Mandy is brutally murdered – not really spoilers, tbh – by Jeremiah Sand (Linus Roache) and his hellish band of acid-swilling psychos, it falls to Red to exact protracted and bloody revenge. This is not a film that encourages a nuanced review: it is wild and crazy, high on its own bodycount. Cage, of course, lords over the carnage with devilish aplomb – forging his own battle axe here or snorting a huge pile of cocaine off a shard of broken glass. And here he is again, lighting a cigarette off the flaming head of a vanquished foe.

For those of us who admire Cage when he’s full tilt, Mandy is probably the actor’s best since Werner Herzog’s Bad Lieutenant: Port Of Call New Orleans – another film (and filmmaker) that unshackled Cage. Who wouldn’t hallucinate a giant iguana after a crack binge, after all? It’s hard to think of an actor so willing to go so far in pursuit of deranged emotional truths as Cage. Mandy is among his best.