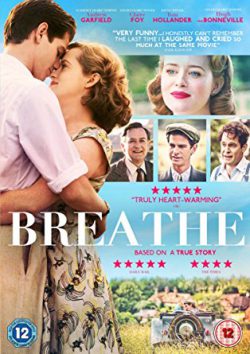 Breathe is the story of Diana and Robin Cavendish who live a charmed and idyllic life of the upper middle class in England. They meet at a cricket match on the village green and Diana just knows that Robin is the one. He, too, knows that she is the one for him. Robin is an overachiever, excels at everything he sets his mind too and becomes a tea broker. The Cavendish’s are a very modern and progressive couple by 1950s standards. Diana comes on Robin’s tea buying trips to Nairobi, Kenya. Then the worst happens just as Diana discovers she is pregnant. In Kenya he contracts Polio and their world falls apart. He is paralysed from the neck down, only kept alive by the use of a ventilator with a bleak outlook.

The script does flirt with the idea of deeper questions of quality of life rather than just existing after the diagnosis and it does lay bare the horrors of polio. But it somehow loses its nerve and just plays it safe. It shows Diana demanding her husband to choose life over death. Andy Serkis’s jointly owned production company The Imaginarium with John Cavendish was created with the aim of producing next generation storytelling. Alas, Breathe feels rather unimaginative.

When Andy Serkis introduced the film at the press screening he explained he read the script by John Cavendish based on his parents’ lives and just had to make it. This short but sweet tale is told in under 2 hours and was shot in just 7 weeks. Breathe escapes the curse of the passion project with an outstanding ensemble cast: Tom Hollander – playing twin brothers, Hugh Bonneville and Dame Diana Rigg. Clare Foy is luminous. But it’s Garfield’s charm that makes this film enjoyable.