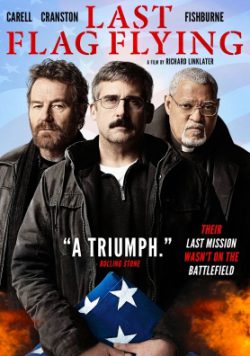 Last Flag Flying is on the surface a funny and smart film with real laugh out loud moments, but delve deeper and there’s a strong overarching message that loyalty and truth are the most important things. It is a bold and fearless look at patriotism, loyalty and duty in a post 9/11 world.

The film starts in 2003 when Larry ‘Doc’ Shepherd (Steve Carell) walks into a shabby looking bar owned by his former brother in arms – Sal from the Vietnam War. They track down Mueller (Laurence Fishburne) now a pastor. Doc seeks Sal to help bury his son who has been killed in action in Iraq. At first the tone & witty dialogue suggests that Last Flying Flag will play out as a buddy movie, but the beauty of the moving premise here slowly turns the film into something deeper; a more introspective and thoughtful piece of work.

The film’s Director, Richard Linklater, is a man known for taking his time with a project, something which nicely reflects the film’s pace and tempo here; Last Flag Flying moves quickly when it needs to but when a reflective pause is needed for the required effect, it is used wisely and delicately. Each of the central characters represents a different face of war and service, but they ultimately have a shared disillusionment towards the US government, which they have all dealt with in a different way – “I got God and you got drunk” quips Fishburne’s character.

The script is peppered with sharp dialogue and interaction between the seasoned veterans, which is enjoyable throughout. It’s an intelligent film that seeks to explore our differences, our life choices, how we deal with grief and how we react to our government’s choices; the decisions that are made on our behalf. The vets know who they are and understand the path they have taken in life but are still struggling to come to terms with the world around them and the chosen paths of others. Was this what they fought and lost friends over? Last Flag Flying will take you by surprise – it has both style and substance.