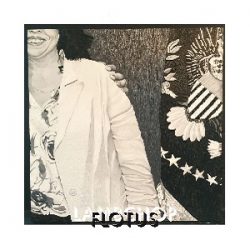 Kanye West has a lot to answer for. While Auto-Tune was brought to the mainstream’s attention by Cher’s Believe back in 1998, West used the vocal processing tool to enhance the mournful, melancholic mood of his fourth album 808s & Heartbreak, arguably inventing the likes of James Blake, Bon Iver and Drake in the process.

Now, eight years on, Kurt Wagner has taken on the mantle. It’s mildly surprising, but not shocking –after all, the singer and songwriter has continually pushed the boundaries with Lambchop, the Nashville alt.country group he’s led for almost 30 years. Although it sounds little like their best-known work, such as 2000’s Nixon, FLOTUS has some obvious antecedents – 2012’s Mr M was a slow, sparse, soulful record, while The Diet, the 2015 album by Wagner’s side-project HeCTA, dealt with similar electronic textures.

The album is bookended by two long, strangely static songs. Opener In Care Of 8675309 is like a cut from Mr M, but with Wagner squeezed through subtle Auto-Tune; The Hustle, meanwhile, closes the album with an 18-minute epic, more Kraftwerk than Kristofferson. “We’ll have sunshine,” calls out Wagner, his voice no longer processed. It’s not only one of Lambchop’s finest songs, it’s one of 2016’s best.

Between these two behemoths, FLOTUS is more manageable. Howe is the kind of melancholic slow jam that James Blake would kill to have written, Writer is echoey and sparse, reminiscent of Bill Callahan’s dub album Have Fun With God, while NIV is still tender despite Wagner’s voice being robotically warped out of all recognition.

FLOTUS could have been a disaster – a Nashville guy pushing 60 trying out the tropes of the young – but Wagner is too canny to fail like that. Instead, he’s borrowed someone else’s palette to paint his own, unique picture. Thanks, after all, Kanye.