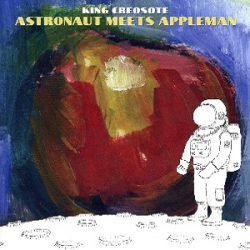 Kenny Anderson, the Fife-born singer-songwriter known as King Creosote, has always kept up an impressive work-rate – since 2014’s acclaimed From Scotland With Love alone, Anderson has put out three albums independently. The excellent Astronaut Meets Appleman doesn’t contain the conceptual framework of his last few records – 2011’s Diamond Mine, a collaboration with Jon Hopkins, and From Scotland…, a soundtrack to Virginia Heath’s documentary of the same name – Astronaut… succeeds through its bounty of affecting songs.

You Just Want is a brooding, seven-and-a-half-minute opener, incorporating circular acoustic guitar, strings and cut-up samples of harp and female backing vocals; it’s an appropriately intense backdrop to Anderson’s tale of desperate devotion, and sets the scene for much of Astronaut…. Elsewhere, Anderson raises the tempo, most successfully on the ska-influenced Wake Up To This, and Surface, a hymn to being ignored complete with saw-tooth synth tones and a motorik beat. On the latter, and the propulsive Melin Wynt, he enlists the chanter – a simpler version of the bagpipes – and it fits surprisingly well with the arrangements’ electronic elements.

What makes King Creosote so interesting is not just his songs, however, but his experimental leanings, and they’re certainly indulged on Astronaut…. The closing Rules Of Engagement begins as a dour look at arguments with a loved one, before transforming into an ambient, submarine coda of harp and electronics. Peter Rabbit Tea, meanwhile, mixes Anderson’s accordion, hand drums, cello & harp with a sample of a small child endlessly repeating the title, eerie & cute at the very same time.

With so many releases to his name, it might be tricky to pinpoint just one classic Creosote album, but Astronaut Meets Appleman is right up there among his greatest achievements.

Get a FREE EP when you buy King Creosote’s new album on any format, EP track list: