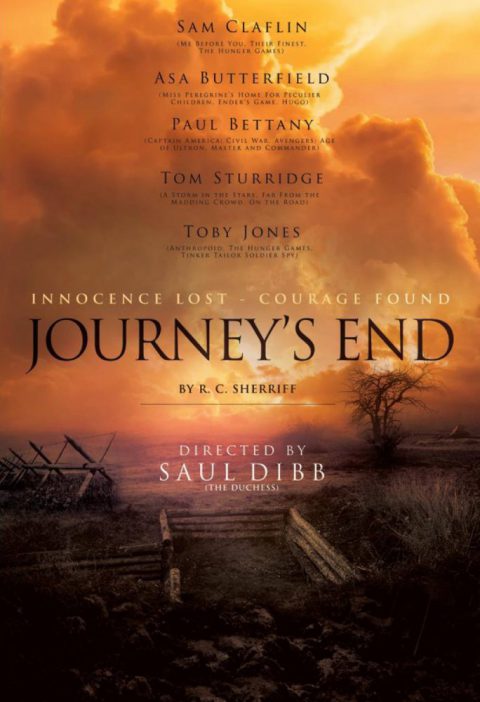 R.C. Sherriff’s groundbreaking play of life in the trenches is brought to life in this this new adaptation by Saul Dibb. Often plays do not translate well on screen feeling too theatrical – not so with this version. Dibb’s Journey’s End captures the sheer chaos, confusion and claustrophobic atmosphere of life in the trenches during the First World War. Hope might be in short supply but the courage and humanity of those men is ever present in this film.

Journey’s End covers a period of four days during the final year of the war in 1918. It is set in the trenches as they prepare for a German attack. Each character is designed to show a different side of the war. Raleigh (Asa Butterfield) and his youthful vigour and innocence that gets completely obliterated after going over the top. Uncle / Osborne (Paul Bethany) and his steady hand that keeps the trench sane. But it Sam Claflin who gives a nuanced yet visceral performance as the beleaguered and war ravaged Captain Stanhope who manages to capture the frustration, futility, sense of order and duty all the while knowing all might be lost.

The attention to detail in the trenches is astounding and there is terrific camera work here; particularly in the scene where Raleigh and Uncle go over the top, we hear the men wish them luck but only their boots are shown wading through the mud, marching to their end.

The play’s original title was – Waiting. Throughout this film we are waiting or should that be awaiting the inevitable, yet when it comes it is no less shocking. The scenes are heart stopping and shreds all your emotions whilst you watch the enemy bombs obliterate the trenches. It’s a visual assault of the most important senses – heart and mind. A must see.