I Am Not A Witch 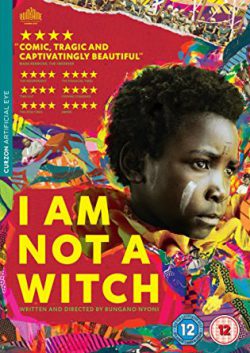 First time writer-director Rungano Nyoni brings a film that really highlights the treatment of women in Africa through the eyes of a child. I Am Not A Witch is a multi-layered, yet effective and provocatively titled film that shows the stark choices that women still face in some parts of the world.

Shula is an orphaned seven year old who the local villagers believe is the reason that strange things have started happening in their community. They complain to the local police officer who, instead of taking the girl to an orphanage, calls the local corrupt official, Mr Banda to tell her she has a young girl who might be a witch.

There’s a stark choice at the beginning of this film – do you become a witch or choose to be a ‘goat’? Shula decides to be a witch instead of picking the unknown fate of being a ‘goat’. The film is a litany of symbolism and metaphors; the power of the crowd and the obvious lies that are told throughout the film hold power because lots of people keep repeating them. In the witch camps the denounced women are tied to huge bobbins of white ribbon to stop them flying away. The audience soon realises that the men are fearful of women gaining power because they erroneously believe it will mean they lose theirs.

Maggie Mulubwa as the young Shula the witch is the breakout star here. Overall, I Am Not A Witch is a perverse, absurd and funny snapshot of life in rural Africa which leaves a very profound afterthought on the treatment of women.