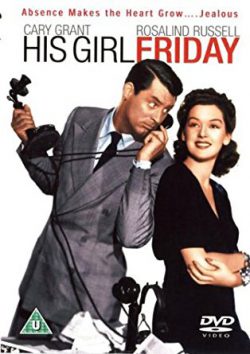 One of Howard Hawks’ greatest films – and, frankly, one of the greatest films ever made, arguably the equal to Bringing Up Baby, Hawks’ other peerless screwball comedy. There’s nothing to dislike here. Cary Grant plays Walter Burns, an unscrupulous New York newspaper editor who discovers that his ex-wife, star reporter Hildy Johnson (played by Rosalind Russell) had got engaged to an insurance agent (Ralph Bellamy). He attempts to lure her back by commissioning her to cover a story involving an impending execution and political corruption, knowing she won’t be able to resist.

This was the second screen version of Ben Hecht and Charles MacArthur’s play The Front Page; the first, from 1931, is also included here in a brand-new restoration. Hawks’ film would later influence the Burt Reynolds/Kathleen Turner comedy Switching Channels but perhaps more memorably the Coens’ Hudsucker Proxy – particularly the scenes with Jennifer Jason Leigh’s Pulitzer-winning reporter Amy Archer at the Manhattan Argus offices – and certainly more recently in Aaron Sorkin’s series, The Newsroom.

His Girl Friday is not a film to be watched casually. The gags ricochet at breakneck pace while Russell’s Hildly is more than a match for Grant’s Burns in terms of sheer cunning and speed. It is kind of exhausting watching them at work.

Of course, it is easy – and fair comment – to level all the plaudits at Hawks’ feet. But this is emphatically a collaborative effort between directors, stars and writers where everyone is on the same page and moving at the same speed. And in Cary Grant, we have arguably one of cinema’s greatest male leads – his lightness of touch, surety and quickness of wit perfectly on display here in this, a masterpiece by any standard.