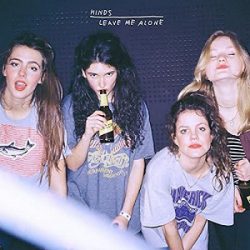 Spain is pretty hot right now – musically, that is, what with Andalusian gutter-blues trio Guadalupe Plata and Madrid garage gang The Parrots releasing strong records in the UK last year. Now Hinds, four women from the Spanish capital, are about to unleash one of the best of the new year.

The album title suggests angst, yet Hinds’ music is the opposite of that – fun, vital and giddy. A group of friends who only taught themselves to play a few years back, the quartet are refreshingly without pretension or cynicism. The Strokes and Billy Childish seem like obvious reference points for their ramshackle, overdriven garage – Hinds even covered “Davey Crockett” by Childish’s Headcoats on a split single with The Parrots for 2015’s Record Store Day – but the scuzz of Black Lips and their ilk can also be discerned.

First single “Bamboo” is here, but is overshadowed by many of the band’s new songs: “Fat Calmed Kiddos” lurches along until the chorus kicks up the tempo, while “Castigadas En El Granero” (“Punished In The Barn”) is an angular delight, reminiscent of early Kinks covering Television. “Chili Town” has touches of spindly C86, while “Solar Gap”, a sleepy, stoned and surfy instrumental, is a welcome intermission.

Things slow down as the album nears its end, with Hinds evoking the ramshackle sound of The Libertines on “And I Will Send Your Flowers Back” and the mainly acoustic “I’ll Be Your Man” – with guitarists Carlotta Cosials and Ana Perrote crooning in unison – until the closing, disco-driven “Walking Home” takes Leave Me Alone to a sprightlier end.

Hinds’ influences might swim close to the surface of their songs, but their music has a sense of genuine fun and excitement that is rarely found. It’s just a shame Leave Me Alone is being released in the dead of winter, as it’s the perfect record to soundtrack long, drunken days in the sun.