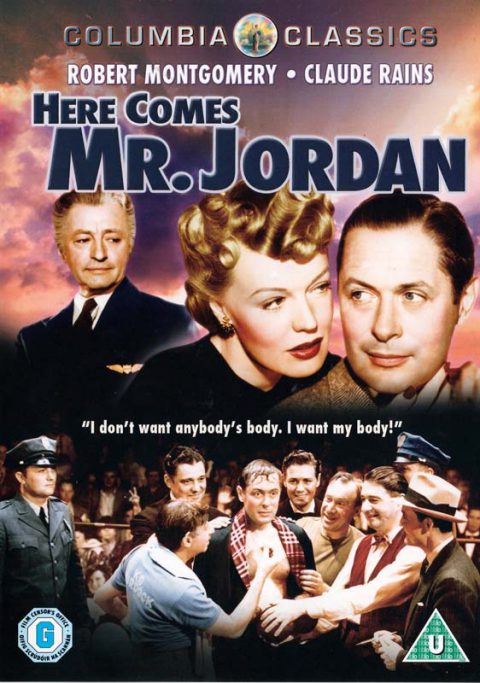 Released prior to America’s entry into World War II, Here Comes Mr. Jordan seemed, subconsciously at least, to address several fears undoubtedly percolating through the country’s collective psyche at such a troubled time. Based on a play called Heaven Can Wait by Harry Segall, this metaphysical romantic comedy cast Robert Montgomery as Joe Pendelton, a New Jersey prize fighter who is apparently killed in a plane crash; but, no, as he learns from Claude Rains’ elegantly-suited celestial Mr Jordan, a mistake has been made and Joe is given a second chance. He is returned to the body of a recently murdered millionaire, which presents a fresh set of problems.

Directed by Alexander Hall, Here Comes Mr. Jordan was a significant hit – it won two Academy Awards and was nominated for a further five. Its success paved the way for a number of similarly themed productions – including A Guy Named Joe and Angel On My Shoulder – as well as a semi-sequel, Down To Earth. It has even been remade twice: by Warren Beatty as Heaven Can Wait and Chris Rock as Down To Earth. Michael Powell and Emeric Pressburger’s peerless A Matter Of Life And Death, meanwhile, found David Niven’s downed squadron leader arguing his case before a celestial court to allow his earthly life to continue.

Part of the charm of Hall’s film comes from Montgomery, who had made his name in light comedy. His swerve into darker territory – as a serial killer in Night Must Fall – earned him his first Oscar nomination; but his second came for Here Comes Mr Jordan, which reconnected him with his earlier, more comedic roles. But it is Claude Rains – only a year away from Casablanca – whose performance as a celestial bureaucrat managing a burgeoning caseload is effortlessly sublime.