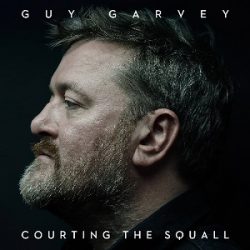 As Elbow’s career has flourished, their songs have got grander and their arrangements increasingly lush. Creating such well-crafted artefacts has sometimes lead to a lack of spontaneity, though, and that’s something that Courting The Squall, the debut solo album by the band’s frontman, seems to seek to avoid from the start.

Most songs here begin with drums and percussion, for the most part banging out surprisingly funky rhythms. Take opener “Angela’s Eyes”, infused with Afrobeat and Caribbean influences, and using only drums, bass, one guitar and a pleasingly obnoxious synth – when it comes in, buzzing and wobbly, it’s a clear dividing line between Garvey’s solo work and Elbow. The title track is a little denser, with harp threaded playfully through the syncopated, earthy rhythms, while the taut “Harder Edges” foregrounds trumpet and Fender Rhodes as if the singer has been checking out some electric-era Miles Davis.

Garvey’s vocals, much like Morrissey’s in The Smiths, float serenely over these spikier, more frantic styles, and his lyrical preoccupations are a delight as always. “In the hills it’s an overcoat colder,” he mumbles in “Courting The Squall”, while he later compares a grey day to “living in a Tupperware box”, and mentions “jitterbugging on a pill” in “Juggernaut”.

The rhythmic surprises continue in the album’s second half, with “Belly Of The Whale” driven by thundering, jerky drums and “Electricity” tackling smoky jazz complete with brushed snare and saxophone. Throughout these twists and turns, however, Garvey generally keeps things simple and stripped-down, letting his nuanced lyrics stand out. The closing “Three Bells” is one of the highlights, a beautiful, brief miniature, almost Low-esque in its simplicity, with the singer’s words flowing softly over subtle drones and muted bass. Sometimes less can most definitely be more.

Pick up the record in-store from 30th October.