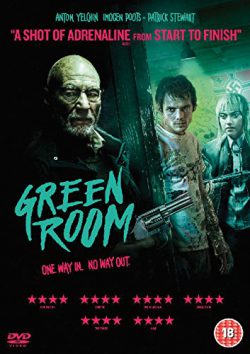 Blue Ruin, the previous film from writer-director Jeremy Saulnier, was a grubby, low-key revenge drama that showcased not only Saulnier’s love for genre films but also his ingenuity working with a miniscule budget. For The Green Room, he stays deep in familiar genre territory. It is essentially a spin on hillbilly horror, where a touring punk band find themselves at the mercy of a bunch of backwoods neo-Nazis led (perhaps improbably) by Patrick Stewart. The references are explicit – Texas Chainsaw Massacre, The Hills Have Eyes, Straw Dogs – but Saulnier’s strength is breathing new life into this familiar set-up.

The Ain’t Rights (influences: “Misfits… Poison Idea… Sabbath, Ozzy…”) are a struggling punk band, barely able to scrape together funds to self-release a 7”. While on tour, a show is cancelled and to try and scrape back some funds, they accept a sketchy engagement to play a matinee show in a bar in remote Oregon frequented by white supremacists. The clientele, they are warned, are “right wing, technically ultra-left. Don’t talk politics.” In a surprisingly bold opening gambit, the band begin their set with a cover of “Nazi Punks Fuck Off”. Surprisingly, it doesn’t get them killed. Instead it is the accidental discovery of a murder scene in the venue’s green room that puts the lives of bassist Pat (Anton Yelchin), guitarist Sam (Alia Shawkat), singer Tiger (Callum Turner) and drummer Reece (Joe Cole) very much on the line. Barricaded in the green room, help comes from an unexpected source – a neo-Nazi (Imogen Poots) who is trapped with them. Outside, meanwhile, Patrick Stewart’s gimlet-eyed gruppenführer calls in the attack dogs. At 94 minutes, Saulnier keeps the focus tight.