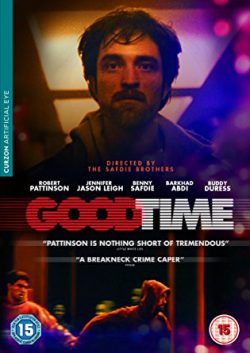 The director brothers Josh and Bennie Safdie deliver, as the title suggests, a damn good film experience. Their names may not be overly familiar yet but after this, their third film, audiences will be hungry for more. The premise is simple: fraternal love. It is an invigorating, breathtaking and sublime piece of filmmaking that never loses its momentum and delivers several emotional gut punches before the end credits.

Nick Nikas has special needs and is hard of hearing in contrast to his brother Connie; street wise, sociopathic with a world weariness that belies his age. The film opens with Nick meeting with his psychologist and Connie putting a stop to the session when his brother starts to cry. They then commit a bank robbery ostensibly so that they can get enough money to buy a farm and live free and far away from everyone. However, things don’t quite go to plan and Nick falls through the glass door and is apprehended by the police whilst Connie escapes. What ensues is a night full of absurdity and desperation as Connie tries to obtain his brother’s freedom from prison by any means necessary.

Robert Pattinson delivers as the well intentioned, older, sociopathic brother – with simmering rage throughout. Forget the Twilight trilogy and watch Robert Pattison step into the sunlight. This is a role that makes you think of Al Pacino and John Cazale in Dog Day Afternoon (1975). The build up of tension is incredible. The film perfectly depicts the individuals trying to remain in control when in actual fact they are in control of nothing. It shows life in all of its absurdity and as the saying goes the best laid plans do not always go to plan.

Special mention must go the supporting cast who in the very truest sense support the principal roles, most prominently Robert Pattinson who is in every scene. What the Safdie brothers do is to use each character in a similar way as Paolo Sorrentino by revealing key facets of the main characters. Jennifer Jason Leigh may only have had ten minutes of screen time but she is electrifying and she demonstrates the chaos and turmoil swirling in Connie’s mind. Also special mention goes to Taliah Webster who plays Crystal the 16 year old granddaughter as well as Buddy Duress who plays Ray. The Safdie brothers introduce us to them, let us engage and then brutally turn their world upside down just as it seems to be going well. This is life people – it is unpredictable and this film captures it perfectly. The social commentary that runs throughout especially on people on the fringes of society and the harsher treatment people of colour suffer is well done with a lightness of touch that allows the viewer to reflect rather than feel manipulated by the director’s intention. This is a must see.