Good Luck & Do Your Best 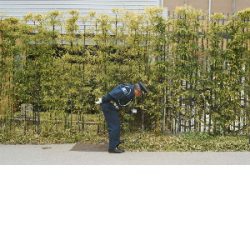 Without lyrics, instrumental music sometimes has to work harder to conjure up a world in the mind of the listener. Electronic music seems especially suited to this task, though, whether it sets out, like Boards Of Canada or Tim Hecker, to chronicle a dreamlike, disturbing unreality, or like Brian Eno or Wolfgang Voight, to invoke a pastoral, meditative landscape.

Throughout his career, Derwin Panda – AKA Gold Panda – has dealt more in specific travelogues, preferring to depict the real world rather than places in his head. Where 2013’s Half Of Where You Live took listeners on a global jaunt, from South America to England via Hong Kong, the Berlin-based musician’s third album, Good Luck And Do Your Best, chronicles his various trips to Japan, the country where he used to study, and which he returned to in order to capture its essence on record.

Japan’s musical heritage is subtly woven throughout the album, skillfully mixed with elements of the myriad electronic genres that soundtracked Panda’s youth. Hence Chiba Nights mixes the tumbling sound of the koto with relentless, pounding house piano, while In My Car again places the koto over Avalanches-esque sample-heavy funk. Although the tempos are high, the beats loud, and the likes of Pink And Green display something of a garage influence, Gold Panda’s music seems better suited to solitude and meditation than communal hedonism; songs slowly unravel and build again in hesitant crescendos, with few overt melodies to distract from these rhythms and exotic moods.

Although Good Luck… has a strong sense of place, Gold Panda has expressed a desire to keep his music from being time-stamped by trends. As such, his third album – taking something from ’80s hip-hop, ’90s Warp, ’00s garage and a lot from the land of the rising sun – sounds beautifully timeless.