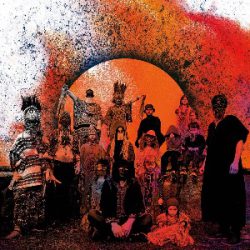 How to follow up such a strong, conceptually pristine record, then, has led this shadowy collective down a variety of avenues since then. On 2014’s Commune they went bigger, incorporating Turk-ish fuzz, stoner metal and all manner of mystical gubbins, so the obvious path for their third full-length is to go quieter.

Touted as their folk or acoustic album, Requiem is a much more complex beast than that, howev-er, with Goat sprawling out across 63 minutes and a multitude of styles. There are perhaps more acoustic guitars here than previously, especially on the doomy Alarms, and a slightly more laid-back feel, yet it’s far more dynamic than the idea of Goat unplugged would suggest. There’s a cer-tain South American flavour to much of Requiem, courtesy of the pan pipes on Union Of Sun And Moon and Temple Rhythms, but elsewhere Goat try out an extended saxophone solo on Goatband, a nod to Joy Division’s Atrocity Exhibition on the grimy All-Seeing Eye and some distilled high-life on Trouble In The Streets.

The three epic tracks that close the album are its strongest, most diverse section, with Goatfuzz a tumbling jam that sounds like Them Crooked Vultures jamming with Tinariwen, and the eight-minute Goodbye sparkling, Persian acid-rock; closer Ubuntu, meanwhile, is almost ambient, with electric piano, field recordings and spoken word. It all fades out with a muffled return to the riff of Diarabi, the opening track of their first album.

Let’s hope that the Möbius Strip-like ending, along with the album’s title, don’t spell the end for Goat – the high points of this infectious and downright fun record open up new pathways for the collective that are well worth exploring.