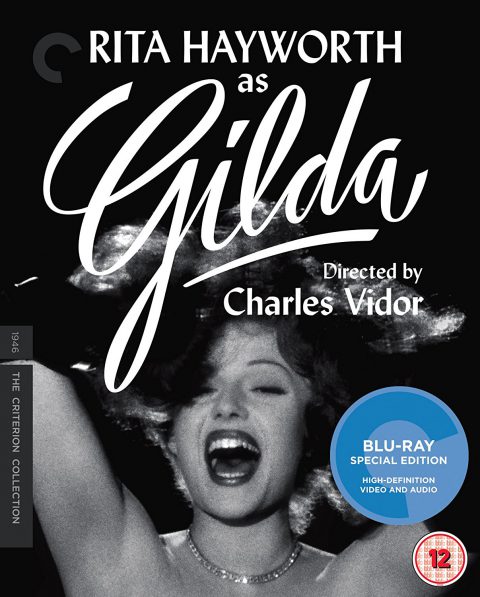 In August 1946, the French film critic Nino Frank drew attention to a prevailing sensibility coursing through Hollywood crime movies during that decade. Writing about The Maltese Falcon, Laura, Murder, My Sweet and Double Indemnity, Frank first coined the phrase ‘film noir’. Nevertheless, Gilda – released months after Frank’s groundbreaking essay – clearly played a role in the development of the genre.

In 1946, Rita appeared in John Huston’s noir-ish adaptation of Hemingway’s The Killers as a beautiful, sultry, double-crossing femme fatale. For her next film, Charles Vidor’s Gilda, she further consolidated the idea of the femme fatale, here trapped in a hateful ménage a trois in post-war Buenos Aires between her cruel new husband (George Macready) and her ex-lover, a brooding, amoral American (Glenn Ford). Neither men, it goes without saying, are especially good sorts. “Hate can be a very exciting emotion,” notes one character. “Very exciting. Haven’t you noticed that?” It’s a critical moment in the film – essentially identifying the motor that drives the otherwise elusive and unfathomable Gilda. There are casinos, Nazis, secrets and in Hayworth’s two renditions of “Put The Blame On Mame”, a scorching torch song.

The film itself is beautifully designed by Van Nest Polglase (Citizen Kane) and lit by Rudolph Maté (who had photographed Dreyer’s The Passion Of Joan Of Arc) while Hayworth’s costumes were designed by Jean Louis – head of design at Columbia, who collaborated with Hayworth on nine films. It is Louis’ diaphanous silk and satin gowns that not only echoed her character’s enigmatic qualities but also did much to establish Hayworth as a major screen superstar. “Men go to bed with Gilda but wake up with me,” she once noted, a grim observation on the way that her signature role had became interwoven with male fantasy.

– Rita Hayworth: The Columbia Lady, a 2000 featurette on Hayworth’s career as an actor and dancer

– An essay by critic Sheila O’Malley