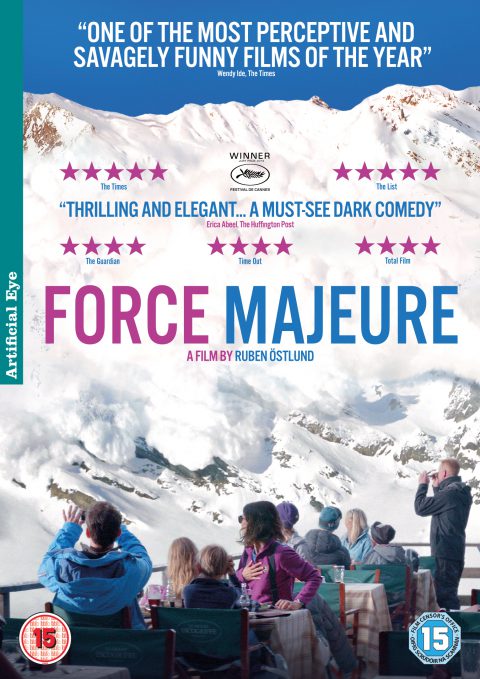 Ruben Östlund’s Cannes jury prize winning psychodrama ‘Force Majeure’ is an astutely observed critique of the institution of marriage and traditional gender roles. A middle class Swedish family holidaying in the French Alps are introduced; while the family self-edit their trip into posed family portraits on the slopes the viewer is forced to observe the banal reality, including toilet breaks and tooth brushing.

This uncomfortable sense of voyeurism is felt repeatedly throughout the film as exemplified by a bathroom scene in which mirrors make it impossible to perceive where the camera is placed. The father (Tomas) is also witnessed mid emotional breakdown in a corridor by a stranger, the passerby serving as an on screen representation of the viewer. Fredrik Wenzel’s cinematography is visually stunning but at times cold and distant. Östlund shot far away from the action on high resolution digital video, camera angles decided during a painstaking post-production process.

During lunch on their second day they observe an avalanche heading towards them. The couple’s instinctive split-second reactions set up the crisis played out throughout the film. The mother (Ebba) immediately calls for Tomas in an effort to protect her children, whilst Tomas flees. The avalanche is not only a traumatic experience (especially for the children) in itself, it also serves as an extended metaphor for the family’s psychological trauma; like the avalanche the incident starts out small before gathering momentum and threatening to destroy the family as Ebba and Tomas’ relationship breaks down.

‘Force Majeure’ is a toe curling exploration of the family unit, a typical family breakdown transported to the French alps where their grim situation is juxtaposed with the majestic scenery providing the backdrop. The crisp chill of Wenzel’s photography illustrates the ongoing conflict between man and nature – how we fail to control the world around us and our own feelings, a notion compounded by the realisation of our own fragility and ultimately the limitations of the human condition.