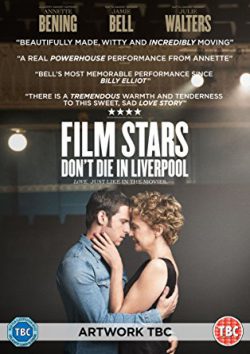 In 1981 when the film begins Gloria Grahame’s (Annette Bening) star has waned. She is now working in a small theatre in a hotel in Lancaster playing the role of Amanda in the Glass Menagerie when she collapses. Taken to hospital she makes a call to a former lover, Peter Turner and implores him to take him back to his family house where his mother, Bella (Julie Walters) can take care of her.

Paul McGuigan’s adaptation and direction of Peter Turner’s memoir is exquisite both in composition and execution, it will leave you wishing that you too had a love like this. The film uses flashbacks to help the viewer understand how this passionate and enduring love affair began. These scenes do not impede the flow of the narrative but instead enables it and deepens the audience’s understanding as to why their love is so profound for one another.

Though her star has faded she is shown as having her dignity and compassion to her younger lover and her wit is still razor sharp. In the scene where Gloria is renting a room in Primrose Hill in 1979 she tells Peter: “I like habits, especially bad ones”. Their deep emotional and physical bond is clear throughout the film but the scene when he lays her clothes out for her will have you reaching for the tissues.

“She almost didn’t make it” is uttered by Bob Hope at the end, reiterating the film’s title. It is an elegant and poignant look at love, faded stardom and what we will do to protect the ones we love.