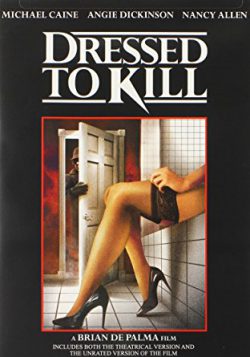 Brian De Palma had been making films since the late Sixties although arguably it wasn’t until 1973 that he found his creative ‘voice’. This was with Sisters, a psychological horror film about separated Siamese twins – one of whom is a suspected murderer – that owed a clear debt to Hitchcock. De Palma’s next few films refined his approach: Obsession, written by Paul Schrader, was a riff on Hitchcock’s Vertigo, while Carrie (1976) and The Fury delved deeper into more grand guignol horrors. Carrie inaugurated De Palma’s golden run of films that lasted until 1989’s Casualties Of War. His most daring films are two brilliant thrillers – Dressed To Kill (1980) and Blow Out (1981).

Dressed To Kill is an accomplished homage to Psycho – although it is very much a film with its own merits. It emerges from New York as the Rotten Apple – post-disco, pre-AIDS – where a thick, nightmarish grime discoloured the city. It is a film about sex and about death; delivered as garish, ripe pulp. The tone is set early on in an eight-minute, dialogue-free sequence in which Angie Dickinson’s sexually deprived housewife goes to the Metropolitan Museum of Art and picks up a man who, it transpires, may or may not be a killer. Among the people whose lives the killer touches in one way or another are Michael Caine’s East Side psychiatrist, Nancy Allen’s high class call girl and Dennis Franz’s dogged detective. Everything seems to lead to a possibly homicidal transvestite being treated by Caine’s sympathetic shrink.

The following year, Caine offered his services to another emerging New Hollywood director – Oliver Stone, with whom he made the psychological horror film, The Hand. In that film, a severed hand takes on a murderous life of its own; equally batty as Dressed To Kill.