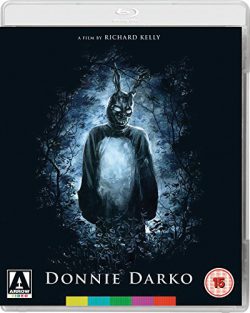 When Richard Kelly’s film was first released in 2001, no one knew quite what to make of it. Was it a religious parable, a mind-bending sci-fi reverie, or a weird Gen X movie – or all three? Whatever, it earmarked Kelly as a filmmaker to watch. It also made a star out of Jake Gyllenhaal, who played the disturbed suburban high school student who narrowly avoids being killed when a jet engine falls through his roof; soon after, he experiences terrifying visions of a giant rabbit, who tells him the world will end in 26 days.

Despite its instant cult status, Donnie Darko’s reputation has wavered somewhat in the intervening years. A Director’s Cut in 2004 restored 20 minutes of footage but these only seemed an unnecessarily cumbersome add-on. They distracted, too, from the most compelling subtext of Kelly’s original: time travel as a metaphor for mental illness, with Gyllenhaal’s disenchanted teenager freaking out as the countdown moves closer to, we believe, the end of the world.

The original, though, still retains its own wired, internal logic, ambiguity and mystery. Released the same year as David Lynch’s Mulholland Drive, Donnie Darko shared that film’s oppressive strangeness, as well as its chronological contortions; not for nothing was Kelly hailed as a natural successor to Lynch. But Kelly’s filmography has diminished since his debut – which perhaps accounts for the way it has fallen slightly off the radar. His epic 2006 film Southland Tales flopped – a victim of ambition, sprawl and volume – which his third film, The Box, from 2009, was a slight remake of an old Twilight Zone story. He has been conspicuous by his absence since; as if he too has fallen into one of the strange wormhole phenomena that Donnie sees at the film’s close.