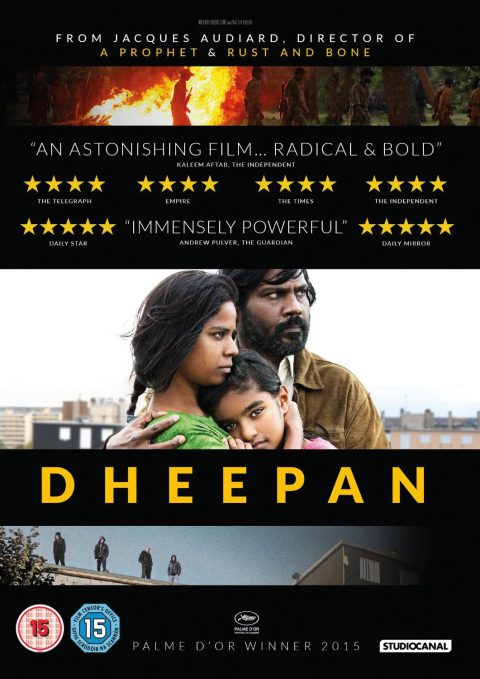 For an immigrant, trying to make a new life in Europe is a difficult business, beset as it is by the prejudice of others and, in some cases, the disruptive actions of his fellows. The characters in Jacques Audiard’s films are usually outsiders, operating on the margins. You might think of Jean-Louis Trintignant’s petty gangster in See How They Fall, Tahar Rahim’s incarcerated protagonist in A Prophet or Romain Duris in The Beat That My Heart Skipped, operating in Paris’ violent criminal underworld. Incidentally, The Beat That My Heart Skipped reworked the 1978 American film, Fingers, and historically Audiard shares many themes and obsessions with that film’s writer and director, James Toback. Both filmmakers explore what happens to men in a violent milieu, when the mask of civilization threatens to crack.

Dheepan (Antonythasan Jesuthasan) is a Sri Lankan Tamil Tiger who flees to France at the end of the civil war. To claim asylum, he poses as a family with a young woman and a little girl he has never previously met; the three end up resettled in a housing project outside Paris. They barely know each other, but Dheepan tries to build a new life for his ‘family’.

Audiard uses his time wisely to incrementally build up a bleak picture of life at the toughest end of the social hierarchy. Events, however, take a darker turn at the halfway mark with the arrival of Brahmin (Vincent Rottiers): the former leader of a local gang who, released from prison, has come to reclaim his territory. What follows finds Dheepan returning to guerrilla mode: the vestiges of post-traumatic stress disorder become plainly evident.

Jesuthasan is a former child soldier with the Tigers, who fled Sri Lanka in the 1980s. He made his way to France, where he became a successful playwright and novelist; although Dheepan is his first leading role, it is unlikely to be his last.