Let The Record Show: Dexys Do Irish And Country Soul 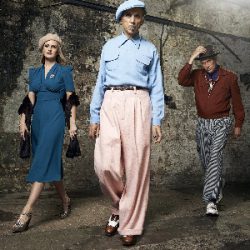 Kevin Rowland’s intended follow-up to Dexys’ masterful Don’t Stand Me Down (1985) was an album of Irish folk songs, aptly titled Irish – and yet, the group splintered before any work could be done. Today, with Rowland and Dexys resolutely back as a creative force, they have brought this idea to fruition, recording traditional songs such as Curragh Of Kildare and Carrickfergus alongside standards like Smoke Gets In Your Eyes and more recent songs like Rod Stewart’s You Wear It Well.

In 1999, Rowland released a troubled covers album, My Beauty, which infamously portrayed him resplendent in lingerie on the cover. Needless to say, Let The Record Show portrays the 62-year-old and his group in a more dignified light, with these 12 cuts given gorgeous, subtle arrangements. Original Dexys member Helen O’Hara returns to contribute elegiac violin to opener Women Of Ireland, which comes on like a Morricone score for a spaghetti western filmed in Armagh rather than Almería. The lilting waltz I’ll Take You Home, Kathleen, intended for the tracklisting of Irish in the late ’80s, showcases Rowland’s voice, as tender, controlled and emotional as ever, backed by piano, massed strings and gently ebbing guitar. Elsewhere, their version of the Bee Gees’ To Love Somebody is stately and dramatic with conversational vocals, and would have fitted perfectly into Dexys’ previous album of original songs, One Day I’m Going To Soar.

Their version of You Wear It Well is one of the louder, more joyful tracks here, yet it lacks the melancholic power of much of Let The Record Show; however, Joni Mitchell’s Both Sides Now, given a soulful redress, works a treat, its swaying piano a constant behind Rowland’s deep croons. Though it might have taken three decades to complete the project, Dexys and Kevin Rowland still wear it very well indeed.