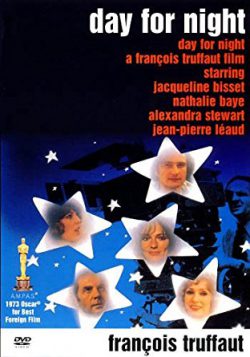 François Truffaut’s most successful film overseas – where it won a BAFTA for Best Film and the Oscar for Best Foreign Language film – Day For Night comes from a long line of films about films. The director himself plays Ferrand, a filmmaker who is shooting a melodrama, Je Vous Présente Paméla; in turn, the filmmaking process itself is chaotic and farcical. There is a highly-strung Hollywood star, a neurotic alcoholic co-star, a young heartthrob – all of whom are motors for a series of catastrophes and intrigues.

As far back as 1914, Charlie Chaplin and Roscoe ‘Fatty’ Arbuckle starred in A Film Johnnie – a knockabout one-reel comedy set in and around the Keystone Studios. But Truffaut’s film explicitly belongs to a European tradition of films that includes two from 1963 – Fellini’s 8½ and Godard’s Le Mépris. Ferrard is like Mastoianni’s harassed director Guido in 8½ ; the frustrated attempts to make a film echo the experiences of Fritz Lang (playing himself) in Le Mépris as he attempts to navigate an overbearing producer (Jack Palance) and his key cast and crew to make a film of Homer’s The Odyssey.

Day For Night opened on 24th May, 1973. A few days later, Godard wrote Truffaut a letter denouncing both the film and his former friend. Truffaut, in turn, wrote a 20-page letter outlining his own views on the subject.

The squabbling between Godard and Truffaut has much, arguably, to do with the differing trajectories of their own careers – Godard himself had withdrawn from the mainstream film industry by 1973, while Day For Night underscores how accessible and engaging Truffaut could be. Day For Night is a breezy, likeable film, well cast with Jacqueline Bisset, Valentina Cortese and Jean-Pierre Léaud. A brief cameo from Graham Greene – under his real name, Henry Graham – as an insurance company representative compounds the film’s heightened sensibilities.