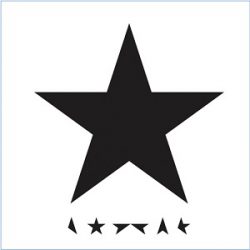 While The Next Day remains a strong album, its surprise release in 2013 was, in hindsight, more shocking than its contents. Rather than looking back to his previous triumphs, though, on Blackstar David Bowie is pushing his own boundaries once again.

Synthetic electro-jazz seems to be the order of the day here. The two singles – the soulful, mystical title track and the Cure-like “Lazarus” – are standouts, though much of Blackstar is in fact darker than the Dame has been for decades.

Two of the most intense songs, “Sue (Or In A Season Of Crime)” and “’Tis A Pity She Was A Whore”, came out on a single to promote Bowie’s most recent compilation, Nothing Has Changed, in 2014, but here they appear in very different guises. “Sue…”, previously performed with Maria Schneider’s big band, is now closer to Nine Inch Nails than jazz, while the pulsating “Tis A Pity…” returns to the techno dystopia of Bowie’s Outside album.

“Girl Loves Me” is another hyperactive curio, with James Murphy on percussion and Bowie singing in some Nadsat-esque dialect, but the final two songs on this tantalisingly brief seven-track album – his 25th LP, in fact – return to the shadowy mood of “Blackstar” itself. With saxophonist and bandleader Donny McCaslin to the fore with some very tasteful reed work on “Dollar Days”, Bowie strums an acoustic guitar as he sings of “English evergreens… it’s nothing to me/It’s nothing to see”, sounding in better voice than he has for years. “I Can’t Give Everything Away” ends Blackstar with elegiac synths, programmed drums and a harmonica that harks back to “A New Career In A New Town” from 1977’s Low.

Ultimately, few artists pushing 70 are making music this downright enigmatic, brave and unusual. Although the seven songs here fly off in seven different directions, there’s a darkness at the heart of Blackstar that ties the whole record together in a strange and supremely satisfying way. Classic Bowie, then.