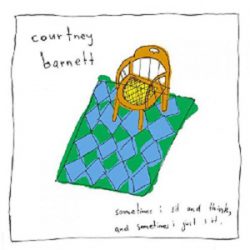 After releasing just two EPs and garnering global acclaim, Courtney Barnett must have had some wobbles when she came to follow up songs such as “History Eraser” and “Avant Gardener”. But with her debut album, released back in March, the Melbourne-based twentysomething managed to expand her sound without losing what made her stand out.

Sometimes I Sit And Think, And Sometimes I Just Sit is heavier than her previous work for a start, Barnett, drummer Dave Mudie and bassist Bones Sloane thrashing like Mudhoney on the roaring “Pedestrian At Best” and trying out taut garage rock on the punchy “Nobody Really Cares If You Don’t Go To The Party”. In contrast to her first two EPs – collected on 2013’s The Double EP: A Sea Of Split Peas – Barnett plays most of the lead guitar herself, and her experiences touring the world with a trio have worked wonders. On the waltzing “Small Poppies”, she rips out pealing solos like Stephen Malkmus, while “Kim’s Caravan” sees her start off a guitar showcase like Neil Young and end it like Graham Coxon at his most atonal.

Barnett’s voice is the crucial element here – both her unique, wry style as a songwriter, and her actual voice, drawling, conversational and thrillingly lazy-sounding even while she’s dealing out some stunning lines. “An Illustration Of Loneliness” finds her alone in New York City, attempting to tell her future by analysing the cracks in the “kind of off-white” ceiling, while both “Kim’s Caravan” and “Dead Fox” use personal experience to examine wider political and ecological issues.

Though Barnett herself is now hinting that she’s keen to spread her wings stylistically over the years ahead, Sometimes… is a fine debut from an artist who’s only just begun to blow our minds.